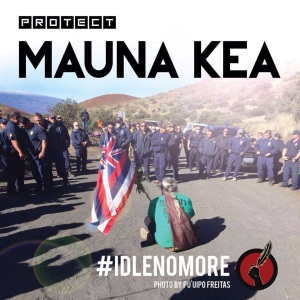 Another appropriate word for this week, as our kanaka continue to resist, protest, oppose the illegal building of yet another telescope (I don’t even want to talk about the magnitude of size of this particular one) upon our mauna kapu. It is a hana kūʻē, a violation, of what is pono (just, right). Who will join us in this kūʻē?

As warriors, we protest and oppose the desecration of our sacred land WITH aloha in our hearts. We are #IDLENOMORE. We go in harmony, with positive energy that we are in this together, trusting in one another to carry this same message. Aloha patriots protecting the mauna kapu.

E kū’ē kākou i ke aloha no Poli’ahu i ke kapu – Let us protest surrounded by love for sacred Poli’ahu.