1. vi. To flash, as lightning; to blaze suddenly, flare up; to rumble uneasily, as a queasy stomach. ʻŌlapa ka hoe a ka lawaiʻa, he ʻino, the fisherman’s paddle flashes, a storm [of haste].

3. n. Dancer, as contrasted with the chanter or hoʻopaʻa (memorizer); now, any dance accompanied by chanting, and drumming on a gourd drum.

4. n. Name for the āholehole (fish) used as sacrifice for love sorcery (hana aloha), or for sorcery that sends a bad spirit to plague another (hoʻounauna), probably so called because of the desired rapidity of the spirit’s actions.

Merrie Monarch is here so I thought Iʻd bring to the surface a word related to hula. Today’s word is ʻōlapa. This is the dance or dancer in what is most commonly referred to as “hula kahiko” or ancient hula. But, of course, in “old” Hawaiʻi they wouldnt call their own traditional dance hula kahiko, right? A more “traditional” term is ʻōlapa, as in hula ʻōlapa. ʻŌlapa is also the term used for the dancer of the traditional form of hula. Some hālau hula have the word ʻōlapa as part of their name. See if any of them perform this year!

The hula and hula dancer are said to be called ʻōlapa because of the tree by the same name. As the wind blows, the leaves shimmer and dance in the breeze, reminiscent of our ʻōlapa dancers.

ʻŌlapa ka uila i Kāneʻohe – The lightning flashes in Kāneʻohe.

ʻŌlapa ka hoe a ka lawaiʻa, he ʻino – difficult to handle is the paddle of the fisherman in a storm (said of one struggling against a difficult situation. First uttered by Pele in a chant about the winds of Kauaʻi). 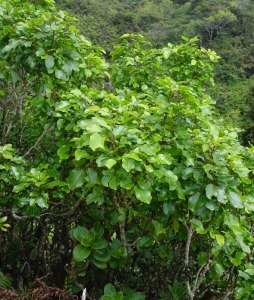 2015 – Liana Iaea Honda. All rights reserved. All versions of He Momi e Lei ai”, in its entirety, past and present, is the property of L. K. I. Honda. Reproduction and use of any kind other than the sharing of this website is prohibited. Alteration to the original content in any form is prohibited in every and any instance, and use in any other variant is prohibited without written consent of the author.