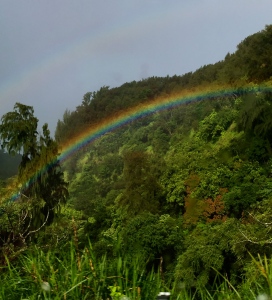 I don’t know why it is (well, I kinda do, it is because we make it so) but we (and by we, I mean me and my posse) always view the sighting of an ānuenue as a positive sign. Good things coming up. Blessings on the horizon. And lo and behold, I was blessed with this beauty of an ānuenue in Kaʻawaliʻi gulch this morning. What a sight. And how apropos. Today begins a new chapter in my life, moving forward. Scandinavian vacation is over, had a wonderful 16 days in Copenhagen and now itʻs time to learn new things, be a change agent, and receive blessings.

Traditionally, an ānuenue was a sign that an aliʻi of high ranking could be found nearby. It meant that the gods were watching over the royalty. An ānuenue is, perhaps, a more generic term as Hawaiians recognize different types of rainbows, such as:

luahoano – the rainbow appearing around the sun or moon.and more.

In terms of being in touch with nature, Hawaiians got it covered. And yes, please note that I am speaking in the present tense. We still got it. Talk to a fisherman or a kumu hula or any other practitioner…itʻs all there.

An ānuenue can also be a sign of bad luck, as is apparent in this ʻōlelo noʻeau:

This was said when a rainbow appeared before the path of one who was on a business journey. Such a rainbow was regarded the same as meeting a red-eyed person — a sign of bad luck. Better to turn about and go home.

Many people in Hawaiʻi take the ānuenue we see on an almost daily basis for granted but I know the tourists will pull over their cars to photograph an ānuenue, however big or small, because in their neck of the woods they aren’t a frequent occurrence.

Mahalo to everyone for all the good wishes. I have been getting a lot of “virtual” ānuenue from friends and former colleagues.