1. nvt. Song, anthem, or chant of any kind; poem, poetry; to sing, chant (preceded by both ke and ka). Cf. haku mele. Kāna mele, his song [sung by him or composed by him]. Kona mele, his song [in his honor]. Ke Mele a Solomona (Biblical), the Song of Solomon. Cf. oli, a chant that is not danced to. Mele ʻoli, gay song. hoʻo.mele To cause to sing or chant. (PNP umele.)

December 1! Time for us to learn some holiday vocabulary. Today’s word is a fairly popular on because of the well known phrase: Mele Kalikimaka (Merry Christmas). Mele, in this case, is a transliteration of the word merry. Don’t they sound super similar? Merry. Mele. Mele is also used for Merrie, as in Merrie Monarch – Mele Manaka.

It cracks me up that the name, Mary, is not Mele. It is Malia. But I am assuming that Malia is the word for the name Mary because of the Maria origin. Mary = Maria = Malia.

Mele is the Hawaiian word for song or to sing. Related to this, mele is also used in reference to a chant that is accompanied by hula (as opposed to oli which is just a chant with no hula or instrument accompaniment).

Mele is the same as melemele, the term most Hawaiian speakers use for yellow.

Ua aʻo ʻoe i ke mele kahiko? – Did you learn the ancient song? 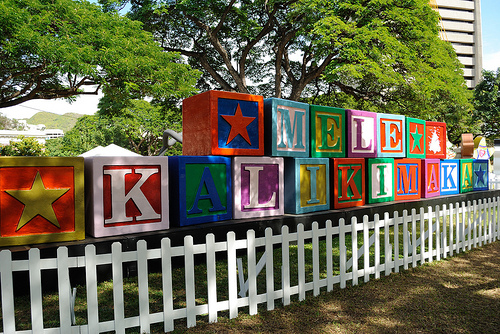