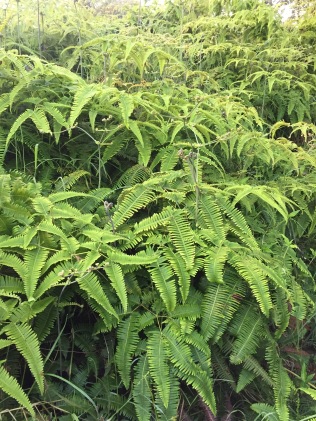 One of the first things I learned about the  uluhe fern is that its goodness lies in its ability to grow so thick in rainforests that invasive species cannot grow. Thank you for that, uluhe. Beautiful and useful. Taking care of the natives. It can grow on fairly barren land. Then as leaves and stems decompose beneath it, the soil becomes richer. More yay for uluhe!

When uluhe grows it is very thick, covering entire sections of mountainsides. If you are on H3 or along the Pali Hwy, you can see it growing alongside the mountain ridges.

The photos above were taken along our mountain road. I am so lucky to be able to have so many different native ferns growing a walk away. I don’t know about using the uluhe in lei for hula. We never did but that doesn’t mean other hālau wouldn’t. Not sure how it would last. It is a very hardy fern.

Pala ulule – Ripened in uluhe fern leaves (A term of derision applied by the shore dwellers of Kaʻū, to the uplands, who were poor farmers. They ripened their bananas in pits lined and covered with uluhe fern leaves, instead of allowing the bananas to ripen in the field).