1. nvt. To bite; to have a tendency to bite, as a dog; to sting, as beating rain; pain, as of stomachache or of childbirth; bite. hoʻo.nahu To bite, cause a stomachache; to pretend to bite.

Remember how I mentioned once (or twice) how my daily words are inspired by life events? Want to pause for a moment to guess what might have inspired today’s word, nahu? 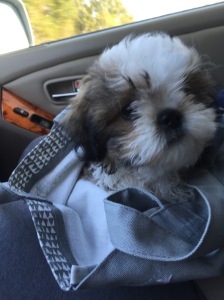 This cutie, Bū, got his big first lesson yesterday. That lesson? After so much nipping  the wagging tail of an old labrador retriever, you need to know there are limits. He knows now.

And now I know that small dogs are wimps. And as a big dog owner, I can say that hands down. Wimps. I thought he was dying. He acted like he was dying. Frantic calls to the vet, cuddling with him, wiping his bloody, snotty nose, he is slowly recovering from the nahu event. Oh, I am not saying it wasn’t a traumatic event, but Bū, MAN UP!

I jest. It was traumatic for me, too. And I am a wimp. I suffered as if I had been bitten. Nahu.

Did you notice that nahu is also the word used to describe the pain of a stomachache or childbirth? That biting action that happens inside. I can see the relationship.

Kekeʻe ka waha, nahu i ka makani – His mouth is wry after biting the wind (said of one who has found that what he said of others is true of himself).

Hoʻi nō a nanahu i kona alelo – He turns to bite his own tongue (said of one who criticizes others and later does just as they).